Skip to main content
Back to Remote Connect Sessions

Laugh until your stomach hurts. Enjoy the unique comedy stylings of Adam Mamawala. Named one of Funny or Die’s "Top 30 Under 30: Comedians to Watch", Adam has appeared on Comedy Central, MTV, BET and SeeSo, and his debut album "One of the Good Ones" debuted at #1 on the iTunes Comedy Charts in December of 2017. Dedicated networking time with old friends and new connections immediately following Adam's performance. 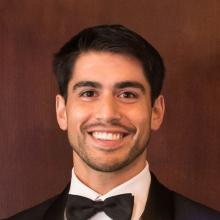